Life is too short for bad beer and boring nights at home on the couch. We’re here to change that. The Jackass Brewing Company brings farm fresh, locally sourced food to a menu of ridiculously good and irreverently named beers. Our corn hole boards and dog friendly patio borders Lewisburg’s rail to trail, so if your 30-minute dog walk mysteriously takes 3 hours because you joined a few friends around the fire pit, we won’t tell.

Come for a beer and stay for the friends you’ll run into. You’re going to wonder how you ever had fun without us.

No, we’re not talking about our owners. We’re describing some of the most notorious traits of the infamous jackass, commonly known as a donkey. Once a person has earned the trust of the jackass, they’ll find them to be willing, steadfast, loyal and determined companions. Asses possess a single mindedness and a refusal to quit. They tend to be quite intelligent, friendly, playful, and eager to learn. In this modern world, those are traits we can all get behind.

Like the jackass, we think the world could use a little more “say what you mean and mean what you say,” along with a whole lot more of being true to yourself. Now, come have a beer with your friends.
Read our story. 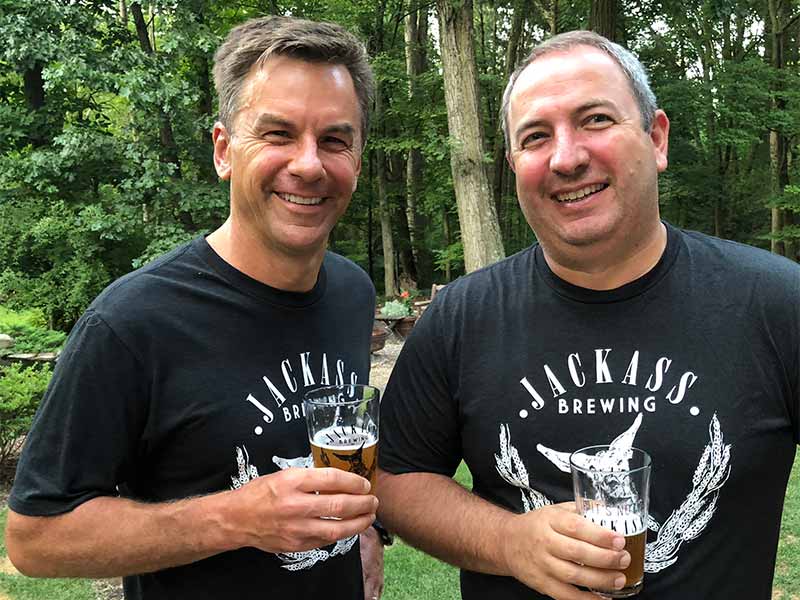 If It's Not A Jackass,
I'll Have Water.
- Everyone
Stylin' attire
for
Jackasses
and Jacklasses
Shop The Store

Run with
the Herd.
Become a Jackass

Tap into your inner Jackass (Tap. Get it???)

Mug Club members get a mug with their member number on it and special invitations to our new brew release parties. Membership is limited, apply with your favorite bartender at your next visit.